Studies have long made it clear that parental education levels and income greatly affect career opportunities in academia. Why is it so much more difficult to break into academia for those from nonacademic households? How can (and should) higher education institutions, funding programs, and society address this inequality? Does the research and higher education system require new impetus in the area of diversity? Or will the established elites always prevail?

At the third and well-attended salon hosted by the Hamburg Research Academy on 20 February 2020, Dr. Reyhan Şahin (a.k.a. Lady Bitch Ray – a linguist, rapper, journalist, author, and Islam, gender, and racism expert), Dr. Annette Julius (secretary general of the German Academic Scholarship Foundation), Ann-Kristin Kolwes (project coordinator for the First Generation Doctorate Mentoring+ program at the University of Cologne), and Professor Michael Gille (head of the PhD Centre at the Hamburg University of Applied Sciences [HAW]) discussed these important issues. The event, which was part of a series on power and academia, focused on the topic of elites.

The series provides a platform for selected guests to discuss pressing matters in academia with the general public. Active involvement is desired: as part of the fishbowl format, members of the public take turns joining the guests onstage. The series adopts the style of a historic salon event and is held in a bar outside the university environment. 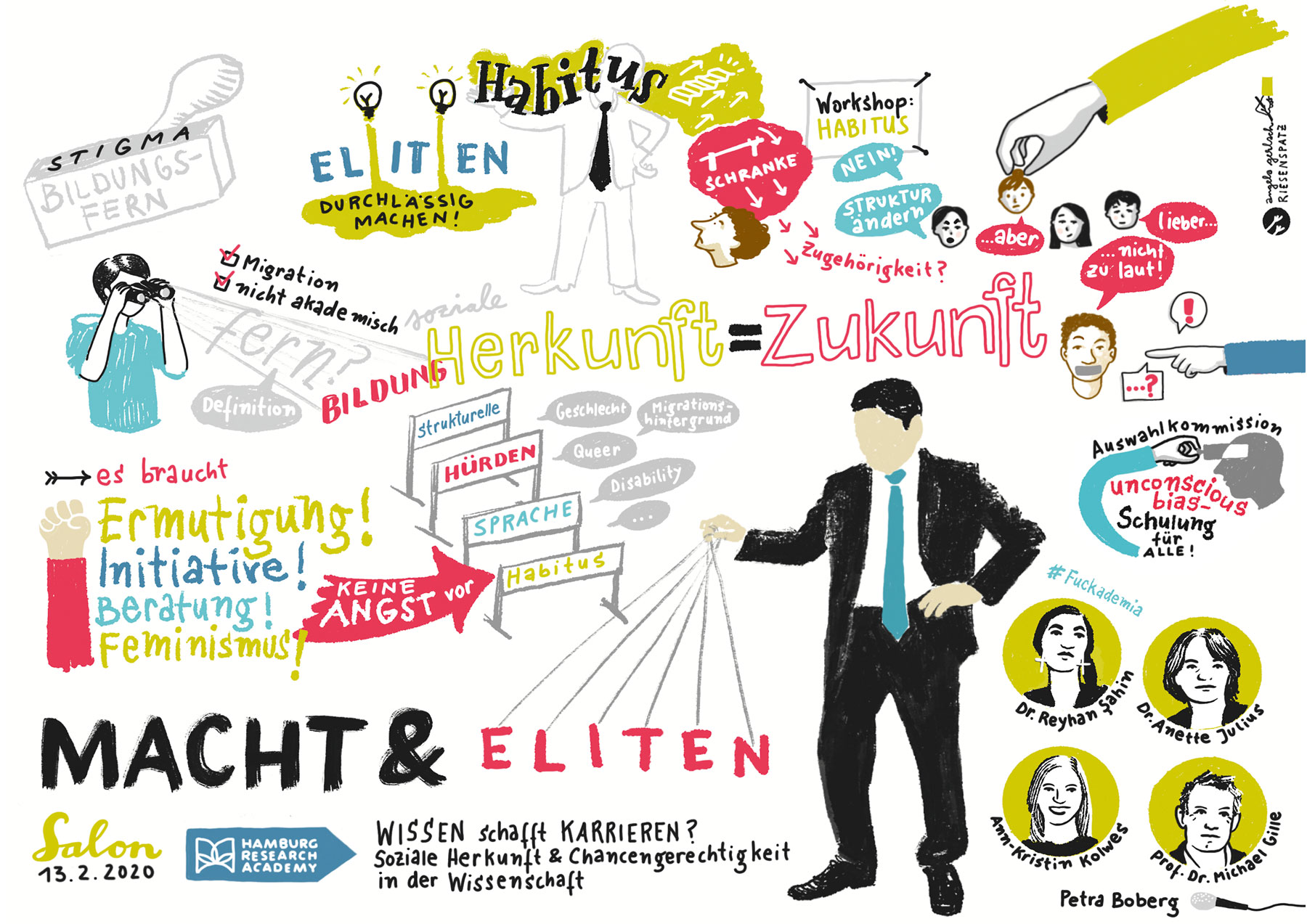 Kickoff of the 2020 series on social justice and equal opportunity

The evening also kicked off the 2020 series on social justice and equal opportunity in academia, Wissen schafft Karrieren? Soziale Herkunft und Chancengerechtigkeit in der Wissenschaft, organized jointly by the Hamburg Research Academy and the Hamburg Conference of Equal Opportunity and Gender Equality Officers in Higher Education (LakoG). Throughout the year, various events will offer a platform to discuss backgrounds and upward mobility in academia as well as to provide support and to make suggestions for doing things differently.

How can foundations and projects that aim to provide greater access to education identify young people eligible for funding and support? Is Reyan Şahin right when she claims in her opening statement that, in some cases, greater stigma increases the likelihood of support? The evening begins with a critical look at the German term bildungsfern (“uneducated” or “without ready access to educational opportunities”), which linguistically discriminates against many so-called first-generation students and early career researchers. In her project, Ann-Kristin Kolwes thus prefers to look more closely at parents’ higher education degrees. The German Academic Scholarship Foundation is especially interested in personal commitment, which can also be influenced by social background. To ensure the fairest possible support opportunities, the foundation thus looks at a potential recipient’s parents’ level of education. The foundation supports roughly 30% of first-generation academics and over 20% of people with a migration background. One large hurdle that it often faces, however, is the potential applicant’s lack of confidence when it comes to applying for support in the first place. Anette Julius points out that, in this context, multipliers are of the essence, as well as the fact that her own statistics somewhat confirm Reyan Şahin’s claim: if you have an immigrant background, you are 10% more likely to receive support from the foundation.

Beyond the university: The HRA Salon took place in the Taugenichts Bar.

Michael Gille is convinced that there are fewer social hurdles at universities of applied science. Students speak to and deal with one another and their professors in less rigidly defined ways. Nonetheless, it can be easy to identify someone’s social background from the language they use in seminars and the length of time they need to complete their studies. Thanks to the practical nature of much of their work, first-generation students and doctoral candidates often feel more welcome according to Ann-Kristin Kolwes; and Michael Gille hits the nail on the head when he says that universities of applied science are where the non-elite rub elbows.

The permanent state of not belonging

The guest speakers repeatedly returned to the question of habitus, also when referring to their own educational careers. Her own experience of feeling that she had no one to ask and did not understand the rules of academia motivated Ann-Kristin Kolwes to work with Verein Erste Generation Promotion, a society for first-generation academics. Reyan Şahin describes the feeling of not belonging as a permanent one. In her eyes, the higher education system is a highly patriarchal, elitist, sexist, and structurally racist system. “Woman, migration background, artistic identity: Lady Bitch Ray. In a highly elitist system, contracts are simply not extended if someone is to be bullied out because they don’t belong,” says Reyan Şahin.

Structural problems in the research and higher education system

Şahin sees funding providers like foundations as only part of the problem. Structural problems already begin during studies at university. Above all, she condemns the lack of transparency and supervisory procedures that could effectively bring misconduct and discrimination to light. Ann-Kristin Kolwes is thus convinced that many good doctoral and early career researchers simply weed themselves out. “It is instilled in you that you have only to perform well to become a professor; but that’s not the case, because you also face discrimination and disadvantages. And as long as the system does not deal with this, nothing will change.” Ultimately, we once again come back to the urgent problem of choosing and appointing professors: those who have been in the system longer select doctoral and early career researchers, but—naturally—they are not free from their own prejudices or properly informed about unconscious bias (see the video on unconscious bias issued by the Royal Society).

However, this systemic problem does not only affect first-generation academics. As Annette Julius explains, “in some subjects, we have 120 people doing a Habilitation for a single professor. In other areas, there is such cut-throat competition that people get stuck in the system forever without alternatives. We must get better at seeing that you also need luck in this system. We have structures that leave young people in the academic system far too long and with no prospects for forging a career.”

The public also participates actively in the discussion—although the selection committee issue proves contentious. For example, Professor Sybille Bauriedl from Europa-Universität Flensburg points out that a professorship is not a matter of luck but a position awarded within existing power structures. This makes it all the more important for professors to show solidarity and become active in selection committees. Analyzing her own selection committee, Anette Julius makes an interesting observation: the more women there were in the selection committees, the worse (statistically) female applicants did. She points out that we urgently need to rethink selection criteria. Or, as another attendee (and member of diverse selection committees for the German Academic Scholarship Foundation) passionately argues, all selection committee members regularly need to have “this kind of discussion or training. Otherwise, the system will be self-propagating.” The foundation can already boast that 30% of its committee members have been trained—an outstanding percentage within Germany. Everyone, however, agreed about the urgency of expanding this kind of training.

At the same time, it is essential to increase the permeability of the entire German educational system, because the road to a selection committee is a long and arduous one. This requires everyone to get on board. As Ann-Kristin Kolwes makes clear in her closing statement, “we can only change things when we address them; when we empower. If I do nothing, if I don’t push for change, then no one will.”

If you need more information about this topic or have additional ideas for other activities (especially as part of this year’s series), contact us!

Stay in the loop

Excerpt from the HRA Salon